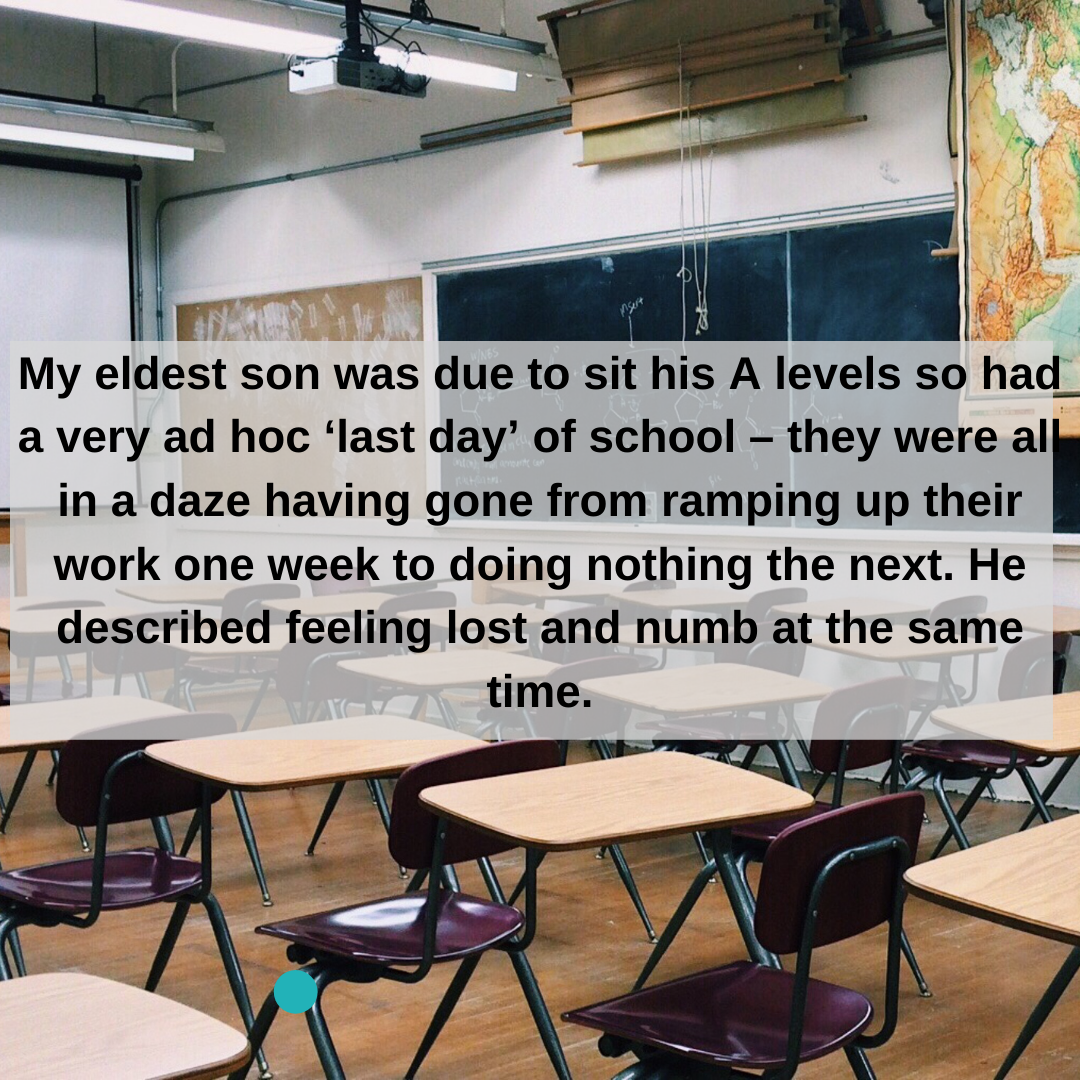 As we went through March and it became increasingly likely that we would be moving to lockdown my recently bereaved Mother opted to come and stay with us. She was in a very fragile state following the sudden death of my Father and thought for her of being alone for an unknown period was unbearable. This meant moving her into my daughter’s room. My daughter is at Uni in a shared house and they took the decision that they would lockdown together. This was a relief in as much as it meant we had enough beds for everyone. But also, I was saddened at the thought that it meant she would not be coming home at the end of the term. In the week before lockdown I drove to Somerset to collect my Mum, helped her switch everything off in her house and loaded up the belongings she wanted to bring. It was a strange feeling, not knowing how long she would be with us for.

My husband began working from home in the second week of March so had already set himself up in our study/my practice/teaching room. In his job he was used to working virtually as his team are in different parts of the world so other than taking out his commute to work it didn’t massively change.

I was working as a self-employed music teacher and gradually through the week before lockdown schools were contacting me to say they were no longer letting visitors in. I had over 50 students across 6 schools and some visiting my home. Last minute meetings with other colleagues and schools to discuss how we maybe able to continue teaching ‘virtually’ via such platforms I had never heard of previously such as Zoom and Teams! There were all sorts of things to get sorted – safeguarding issues around teaching online, suitability of internet connections at each end, cancellation of music exams and what that meant for students. Many, many emails between parents, schools and colleagues…

When schools closed on the Friday afternoon, we said uneasy and slightly awkward ‘socially distanced’ farewells to friends and staff at my youngest son’s primary school. It was so odd not knowing when we would see each other again. We couldn’t anticipate how school from home would work. My eldest son was due to sit his A levels so had a very ad hoc ‘last day’ of school – they were all in a daze having gone from ramping up their work one week to doing nothing the next. He described feeling lost and numb at the same time.

When the lockdown was finally announced on the Monday evening, we knew it was coming but it still felt like a historic moment watching Boris.

The next two weeks (the final two of the term) were spent settling into a routine of Joe Wicks exercise and home school for my 8 year old Josh every morning, then working on plans to resume teaching in the afternoons, fitting in that hour for some outdoor activity with a walk or bike ride. My Mum made herself useful doing washing and cleaning where she could and entertaining Josh. It all felt quite surreal and we couldn’t quite believe that is was going to continue for more than a few weeks. Every evening we watched the briefing and is was scary to hear the rising number of cases and deaths. Having recently gone through a death in our family we talked at length of how sorry we felt for those families not able to say goodbye to loved ones or even console each other in person. It was heartbreaking.

During the Easter break I did my best to arrange fun activities to do at home or in the garden with my son – it was lovely to dedicate so much time to spending time with him and we tried to make things as normal as possible. My older son took to going for walks with my Mum. It never ceases to amaze me how teenagers can switch from being the most antisocial beings with their parents but then turn into the politest, articulate young people with their Grandparents!

Zoom gatherings with family and friends started to spring up and once we had discussed which bits of gardening, clearing out or DIY we had managed to achieve, quizzes became the thing to do!

My husband took on the role of getting the shopping once a week. We planned meals for the 5 of us and ensured we had enough food to last without going in between. Being able to source yeast and pasta became little victories!

A group of us organised putting leaflets through the doors of the older residents in the street offering to get medication and food if people needed it. There was more of a feeling of community than ever before.

We began the term again and this time after home schooling Josh in the morning I was working every afternoon, teaching music lessons via zoom from my lounge. I started at 2 and worked until 7, going from one to the next, being propelled into over 30 different people’s homes – it was fun, strange and quite exhausting! There were some technical issues, forgotten times and interruptions from siblings, parents on loud work calls and family pets but overall, it served the purpose of keeping music going for my students and maintaining some income for me!

In the evenings I would go for a run or walk, sometimes by myself – this was a very welcome time for my own headspace!

Every Thursday at 8pm we joined in the applause for the NHS and key workers. I organised four of my students (who also live in my road) to perform Somewhere Over the Rainbow and Amazing Grace with me.

As the weeks went on our routine became familiar but also began to feel a bit like Groundhog Day! Through all of it we maintained positive and were aware of how lucky we were to be in an area with low numbers of cases. We had access to the outdoors, my husband and I were fortunate enough to be working still. We kept reminding ourselves that things could be so much worse.

By mid-May my Mum started to worry increasingly about her empty house and how much her garden would be growing out of control. She also was clearly missing being in her own home and decided that once the restrictions were lifted, she felt strong enough to return home once more. I took her home in June and Ian stayed with her for a week to help her adjust and do some of the heavy jobs in the garden for her.

Home school continued  and I finished my teaching at the beginning of July. As restrictions were easing some students were returning to school part time and others were able to go away with their families so it made sense to stop. I had also taken the time to properly consider what I wanted to do career wise. I had been mulling over the idea of changing jobs for a while, but this was such a great time for reflection. I started looking at other options and was delighted to spot a role which felt like exactly the change I was looking for.